The Day the Music Died – a 1960s musical Peaky Games freeform for 10 guests plus a host. 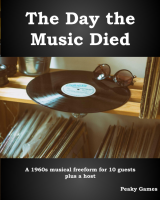 Welcome to Radio Rebecca, the grooviest radio station in the English Channel. Hot on the heels of the 1965 FAB Music Awards, we are pleased to host our famous and exclusive post-awards party, only for the hippest in Swinging London. The results of the awards have just been announced and there is a shock result with the relatively unknown Lovebirds taking first prize.

There are musicians, record promoters and members of the press at the party and fortunes can be made and lost. The party will climax with the winning record being broadcast on the John Corr Evening Show. For now, turn on, tune in, drop outhttps://www.freeformgames.com.

The Day the Music Died lasts 3 hours (including setup and debrief). It is published by Peaky Games and was written by Jim Ashby, Kath Banks, Jerry Elsmore, Heidi Kaye and Janet Young.

These are the characters in The Day the Music Died:

The Day the Music Died has 3 female, 4 male, and 3 gender-neutral characters.

How The Day the Music Died works

The Day the Music Died works like many of our normal murder mystery games, except that there’s no murder. All of the characters have their own goals and objectives. Like our other games, how you achieve your goals is entirely up to you.

On the evening of the game the players are given their detailed backgrounds - including dark secrets, objectives and money. When everyone has arrived the game starts at Radio Rebecca. The real fun then begins as everyone questions each other and tries to achieve their goals. Finally, the game concludes and everyone finds out how they did, and what secrets everyone else was concealing.

The Day the Music Died is published by Peaky Games and assumes that you have hosted a murder mystery game before. While the instructions are fairly clear, if you haven't already played or hosted one of our murder mystery games, we recommend you do that first.